Today saw the return of a family heirloom (well, part of it, anyhow) to this Corley household. After 17 years, I’ve been reunited with my family’s grandfather clock, which friends have stored for me in the interim. The face and movement are with a clock repair shop that will clean, fix and test them, hopefully reassembling everything early next week. In the meantime, the rest of the clock is now in my dining room! 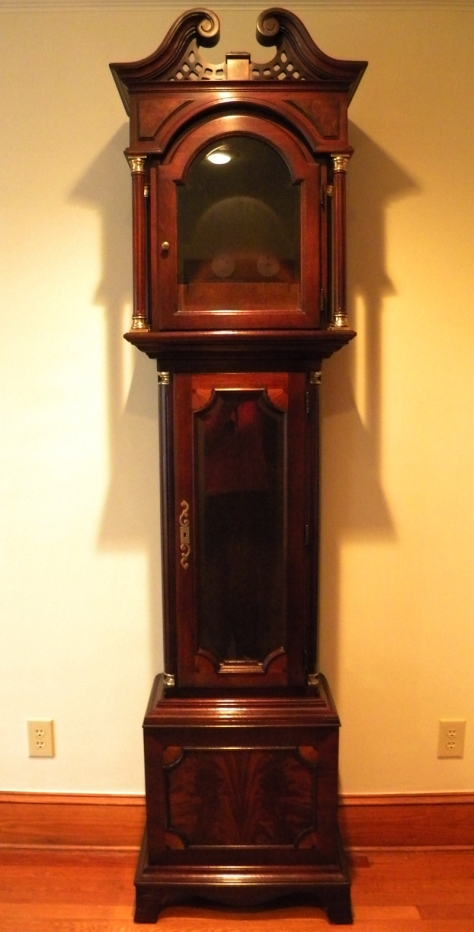 My dad bought this clock in 1978 and it merrily chimed away for my fam until my mom and sister moved out of state in 1994. Me and the clock? We stayed in Maryland. I was soon off to college and moved in temporarily with neighbors. The clock moved with me.

When I went off to college, the clock had to stay at my friends’ house though — dorm rooms don’t have much space to accommodate such a piece (and its Big Ben chiming probably would have infuriated my roommate).

Moving a grandfather clock is not a trivial matter. The movement must be (carefully) removed and packed, the head separated from the body. It costs hundreds of dollars each time.

And so I waited to be reunited with my clock until I was a) in a place with tall enough ceilings; and b) relatively certain that I’d be there a while. It took 17 years.

Oh, I visited the clock (and the friends storing it) often. I know they’re going to miss it. The kids in the household grew up with the clock, much like I did. It eventually stopped ticking though and probably hasn’t chimed in more than 15 years.

I’m really looking forward to seeing the clock restored and the pendulum swinging again. I’m not sure I’ll have the chime turned on — my house is pretty small and I’m afraid it would keep me up at night. I’m sure I’ll ask the clock repairman to play the chime at least once though, for old time’s sake (no pun intended; well, not really).

Stay tuned for a future post when the clock is restored and in working order!

5 thoughts on “Grandfather of a Different Kind”