I was so torn as to which session to attend first thing Sunday morning. Megan Smolenyak? Stephen Morse? I opted for an update on RootsMagic 5 — I have RootsMagic, but admittedly don’t have a lot of time to devote to it. I selected it for maintaining a fully sourced family tree, so working with it is no quick exercise. I hoped the session would renew my  interest in the process. There were a lot of newbies in the crowd, so the discussion stayed pretty basic, but I was impressed nonetheless and was glad to hear that a reader is under development for the iPad, which should be released later this summer.

Next, I attended Thomas MacEntee’s session on Illinois ancestry. I didn’t get to go to FGS in Springfield, Ill., last year although I really wanted to because my Corley line called Illinois home for many years. His session was chock full of Illinois history and resources for seeking various kinds of records. I can’t wait to dig into all of the information he revealed to us.

The next session was by Curt Witcher and he was in full snark mode, which was really funny to watch. He gave us the perspective of the librarian/archivist on the receiving end of so many genealogists’ queries and their rambling stories. I’m not sure how many in the crowd were swayed to edit themselves next time they go to a repository seeking information, but his examples of research query letters (one 6 pages long!) were priceless.

The final session I attended was “The Frugal Curator” by Denise Levenick — I learned so much! Her how-tos for creating boxes and bags for preserving various family heirlooms will be so useful. I can’t wait for the release of her book later this summer.

Sadly, it was then time to finish packing and check out of my room. I made quick work of it, ordered room service for an early dinner and then turned in my room keys. I had about 2 hours before the shuttle would pick me up to return me to LAX. Luckily several genealogy bloggers remained in the lounge and so I had a great time hanging out with them until it was time to depart. Laughing with and learning from some great friends — what better way to end a conference?

Saturday morning, I power-breakfasted at the hotel restaurant, said hi to Caroline Pointer and a few others, and then was off to a full day of sessions. Caroline, Tonia Kendrick and I started out at Elyse Doerflinger’s “Conquering the Digital Monster” session, which she rocked. I came away with several useful tips and apps to try.

Next, I attended Lisa Alzo’s very informative “Beyond the Arrival Date: Extracting More from Immigrant Passenger Lists.” Her presentation was excellent and I’m quite jealous of the records she’s been able to find for her ancestors. I also attended a rather interesting session by Michael John Neill on a probate case with several unusual aspects.

I stopped by the exhibitor hall to have Megan Smolenyak sign a copy of her new book, Hey America, Your Roots are Showing! We chatted about Easton for a bit as she has visited friends here before. She’s soooo nice! And such a rockstar. I attended her afternoon session on “Reverse Genealogy” — one of the best talks that I attended at the conference.

After that, I was a bit sessioned out though and could be found once again in the bar (imagine that!) with the usual crew. Amy Coffin and I went out to dinner at the Greek restaurant across the street. We ended up sharing a table with Stephen Morse and his wife — they’re such a great couple. I can’t say enough how much I enjoy getting to know everyone at these events.

Oh! I forgot to mention that on the first day of the conference, I also met Gena Philibert-Ortega and picked up a copy of her new book From the Family Kitchen, which she was nice enough to give me as a thank you for hosting a guest post from her on finding heirloom recipes and cookbooks.

I just returned today from four jam-packed fun days at the Southern California Genealogical Society 2012 Jamboree. Why would a Marylander with no ancestors from Cali trek so far? Because she was jealous of all her friends who’ve attended and touted the event in years past. Plus, I’d never been to California before.

I arrived mid-morning on Thursday after a very early departure from Baltimore and tried to nap in my hotel room before hanging with my genealogy pals in the afternoon/evening. I say ‘tried’ because I wasn’t very successful due to some ambient noise in the hallway. Turns out we were sharing the hotel not only with this year’s American Idol finalists, who are on tour, but hopeful singers auditioning for The Voice 3. And they practiced. A lot. In their rooms. At all hours. Not all of them very well.

But I digress. I met up with several fellow genealogy bloggers in the lobby and bar that evening, include Denise Levinick, Amy Coffin, Thomas MacEntee, Caroline Pointer, Kimmy VonAspern, Randy Seaver, Lisa Alzo and Kathryn Doyle (hope I’m not forgetting anyone!). Kathryn and Denise had actually served as my welcoming committee as I first arrived at the hotel. We had a great time catching up, but I made an early night of it due to my lack of sleep.

I spent the next morning hanging out with a subset of the above group in the lobby of the hotel after having breakfast with Elyse Doerflinger. I also introduced myself to genealogy megastar Megan Smolenyak. I was ecstatic to run into Tonia Kendrick, whom I hadn’t seen since FGS in Knoxville in 2010. We had lunch that day and then Denise Levenick and I went to the conference registration desk to pick up our nametags and check out the exhibit hall before the first sessions of the conference. At some point during that day, I ran into Kim Cotton (or was it the day before?). I also finally got to meet Gini Webb. It’s so fun meeting folks I’ve only been in contact with over the web.

One of my favorite parts of the conference is networking with fellow genealogists, but there were sessions to attend. On Friday, I attended sessions on a genealogy case study and the impact of the Internet on genealogy. I skipped the last session of the day and instead was found in the bar with Lisa Alzo, Amy Coffin, Thomas MacEntee and many others who wandered in and out. 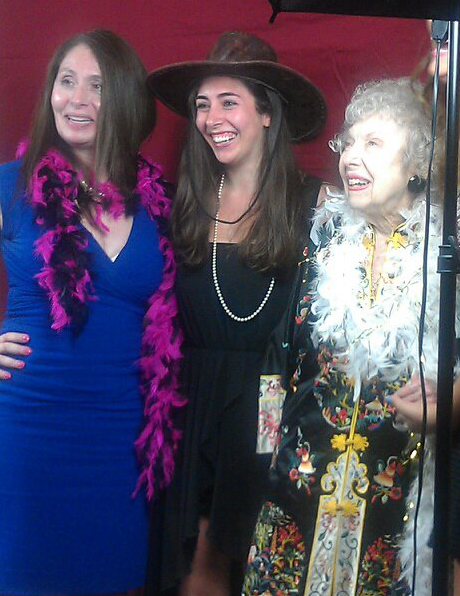 Carla Laemmle, on the right.

That night was one of the highlights of the conference — the Hollywood Gala. We were encouraged to dress to the nines, and many did. There were movie stars from days gone by on hand, including Carla Laemmle, who was in the cast of 1931’s Dracula. We had a lot of fun posing for a photographer while we gabbed and sipped sparkling cider.