The next two photos in my Album Rescue Project were floating loose, but apparently were originally displayed on the second page of the album. Photos that originally appeared on the first page are no longer there, sadly — they either were removed or fell out before I bought the album.

Here is Photo 2 and what’s written on the reverse (click on the images for larger versions):

Well, here is a dilemma. There appear to be two different dates assigned to this photo. On the front is written “S-1917,” but the back has the notation “Oct. 1914 Elizabeth Shugars.” I am thrilled that there’s a name, but now I can’t trust that the notations on the front of each photo contain accurate date information.

Fortunately, the piece of tape on the back isn’t also attached to the front of the photo.

Moving on to Photo 3 (and its reverse side): 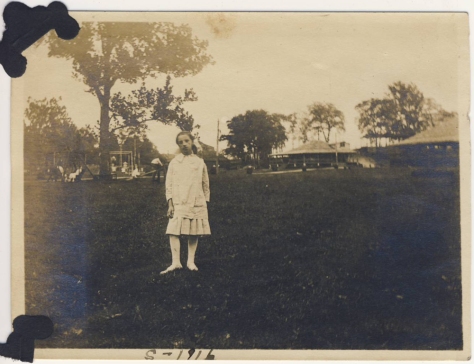 Here we have the same little girl as that in Photo 1, in my opinion. She doesn’t look very happy, does she? The notation on the front reads “S-1916,” but the writing on the back is more exciting. It says “Red Bridge Park.”

The bulk of Google results for “red bridge park” refer to a park in Cicero, Indiana. Here is one web site with a photo of the park’s main buildings. Note how the conical shaped roof of the gazebo mimics that of those in Photo 3.

That said, a Google Images search brings up an old photo from a Red Bridge Park near Chambersburg, Pennsylvania. That looks like the park behind the girl in Photo 3.

To read all of the posts about my Album Rescue Project, use the corresponding category here on my blog. Stay tuned for more!