I am happy to report that one of my clients has published Picnic for Twelve, a book about his parents and their growing family as they navigated The Great Depression and other events over the last century. If you are interested in the life of Irish-Americans during the 1900s, have Boston-area ancestors, or are just looking to read a cleverly written yarn, I highly recommend that you download the book for your Kindle or purchase a print copy.

I provided genealogical research support on the Driscoll and Sheehan families. This was a fun and challenging project to work on, as various members of the family moved around a lot, originating in or living in locations including New York City, Southern California, here in Maryland, and of course, Massachusetts and Ireland. Along the way, vital records unlocked most of the clues needed to solve a few family mysteries. As part of the project, I read an early version of the manuscript. The author is a former editor of the Boston Globe and a great storyteller — I highly recommend this book!

UPDATE: Rootstech has made some floorspace available to a few booksellers at the conference after the recent uproar. I don’t know if they are also making room for other non-tech vendors like crafters…

Dear RootsTech Organizers, to borrow a phrase from a friend, “Who pooped in your cereal this morning?”

Rootstech attracted thousands of attendees to its inaugural event last year — genealogy enthusiasts and professionals of all skill levels, both techie and non. To be honest, I thought that the selections in the vendor hall were a bit underwhelming for a conference of that size.

Now it’s going to be even more limited?

Now, I’m not an official RootsTech blogger or anything, but I did sing the event’s praises on my blog while attending last year and I was really looking forward to going to the 2012 event. Things like this make me wonder if the event is going to have the same positive vibe as last year’s though. I liked how inclusive the event was last year. That’s what made it work.

I really hope that if enough of us raise our voices on this one, RootsTech may reconsider.

While in the Portland, Ore., area for the AIIP11 conference, I visited Powell’s Books. I usually hit the local interest section of a bookstore when I’m traveling because you can find great mementos there. I had another motive on this trip since I have a family mystery involving Oregon — back in the early 1900s, my great-great grandfather Joseph Smith Hayes moved his entire family, including seven children, from East Tennessee to Umatilla, Oregon. I found them there in the 1910 census. By 1920, the entire family was back in East Tennessee. I was looking for local history books that might explain why my ancestors made such a move (and then had to move back).

I found and purchased a book on the Oregon Trail. It might not even be related to my family’s journey, but it looked like a good read. I’m also drawn to old books and I found a doozy:

This book drew me in because it still had the original cover. When I opened it, I was in for a treat: 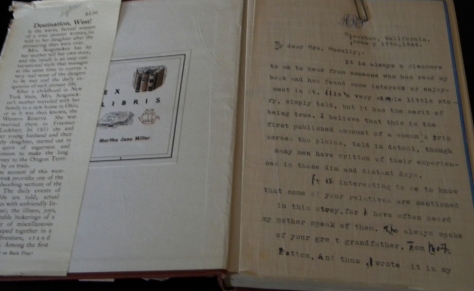 A letter from the author to the book’s one-time owner! Here is page two:

Here is a transcription of the letter:

It is always a pleasure to me to hear from someone who has read my book and has found some interest or enjoyment in it. It is a very simple little story, simply told, but it has the merit of being true. I believe that this is the first published account of a woman’s trip across the plains, told in detaul [sic], though many men have written of their experiences in those dim and distant days.

It is interesting to me to know that some of your relatives are mentioned in this stoey [sic], for I have often heard my mother speak of them. She always spoke of your great grandfather, Tom McF Patton, and thus, I wrote it in my … [end of page one; I suspect a page may be missing]

…MS. this mistake is one of many made by the publishers of the book.

Many years after my mother was located at Empire City, she paid a visit to Salem, where she was the guest of her old friend, Mrs. Sam Garke, the former Harriet Buckingham. While there she also visited with Mrs. Garke, whom I believe she called Belle – though I am rather hazy on this point. I especially recall that she always spoke in glowing terms of your grandfather, Tom MCF Patton, whom she regarded as a very brilliant man.

Thank you for ypur [sic] very interesting letter, -and believe me to be

I found quite a bit of information on Agnes Sengstacken. She died in 1948, only a few years after this letter was written.

In addition to the clues to the provenance of the book and this letter by the author, the book also sounds like it will be a fascinating read! Who knows, maybe I’ll find a clue or two to my family mystery too.

Earlier this year, I created an alert for my last name on eBay. I get daily updates on new items for sale that are related to the surname Corley. There’s a ton of 80s TV show memorabilia related to Al Corley, who starred on “Dynasty” (relationship unknown as of now).

There also are several authors with the last name Corley. This daily alert has netted me two books written by my kinsman in the past year. Over the summer, I scored another copy of A Genealogy of Corleys, which I gifted to my half-brother. Just a couple of weeks ago, another book by a relative went up for auction. It was a Spanish-language novel edited by my great-uncle Ames Haven Corley for use in the classroom.

I was the only person to bid on the book and therefore won the auction. For less than $5 ($.99 bid + shipping), I now am the proud owner of the 1922 Macmillan Spanish Series edition of Amalia. It’s in great shape. Too bad I can’t read Spanish! 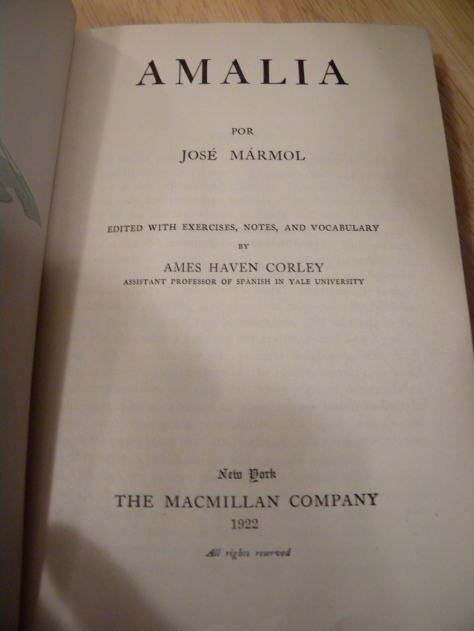 I don’t know a ton about my great-uncle Ames, but I do know that he taught languages at Williams College (where my father eventually went to school) and at Yale University, for whom this book was printed. As the title page above states, he was an assistant professor at the time this book was published.

It is neat to read the preface, written in 1917 by my great uncle, who signed his name A.H.C.

There are exercises at the back of the book, which were devised by my great-uncle as well.

I highly recommend setting up a similar search on eBay — you never know what it may turn up about your ancestors. After the luck I’ve had so far, I intend to set up more alerts for other surnames in my family tree.

This Mother’s Day, I once again call your attention to this poem, which I found folded between the pages of my copy of  “A Genealogy of Corleys”:

"Only One" by George Cooper

The hand-written copy above was addressed “To Mother.” I’ve always wondered who wrote out the poem and the identity of his or her mother. Since this book was once owned by another Corley, they were probably relatives!

I was an avid reader as a kid and loved a lot of the stories around Christmas. I still have this Little Golden Book version of Rudolph the Red-Nosed Reindeer. I remember having a storybook for Twas the Night Before Christmas. I also enjoyed reading the various Christmas stories in book series like Little House on the Prairie.

This is post #17 in the GeneaBloggers Advent Calendar of Christmas Memories.

When I was preparing last week’s Treasure Chest Thursday post, I came across a set of two tiny buttons in my mom’s sewing basket that I hadn’t found before — each bearing the face of Beatrix Potter’s Tom Kitten.

My mom was an antiquing aficianado (read: eBay addict) and I can only imagine what was going through her head when she spied these. All I know is that when I was three, my parents gave me a copy of The Tale of Tom Kitten, which I still have to this day. For all I know, Mom meant to give these to me and either she lost track of them herself in her sewing basket, or she didn’t get the chance to give them to me before she passed away in 2003.

Either way, I’m so glad I found them, all these years later. Finding them caused me to pull out the book, read my parents’ inscription to me and discover the Tom Kitten bookmark still embedded in its pages. The book lover/genealogist in me goes gaga over inscriptions and lost/strange bookmarks. Rediscovering them in my own books is a thrill.