This blog has been quiet because I was on vacation the past week with my fam on the Outer Banks of North Carolina. Below is a photo of four cousins (including moi, on the right). One of them is my sister and the other two are sisters. Can you guess who is who? If you know already or played along on Facebook, please refrain from posting a comment. I will update this post with the answer in about a day (Answer now posted below!). 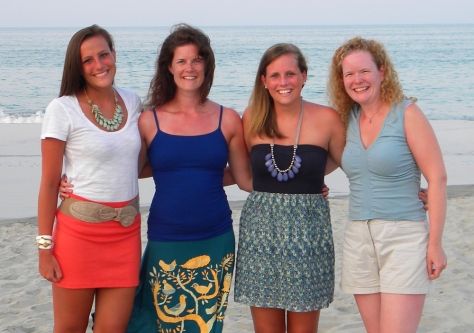 Four cousins, two sets of sisters. Can you figure out who is who?

UPDATE: That’s my sister, Carolyn, in the bright blue tank top. The other two, Shannon on the left and Kelly, are sisters as well. Kelly and I strongly favor our dads in appearance, though our fathers were not related except by marriage (we also have almost the exact same food allergies). Shannon and Carolyn both have their moms’ darker hair.

This is post #15 in the GeneaBloggers Advent Calendar of Christmas Memories and is dedicated to my cousins Shannon and Kevin.

My family is one of holiday birthdays. My cousin, Kevin, was born on Halloween. Another cousin, Shannon, on Christmas. I was born the day before Thanksgiving, and so I get a turkey dinner for my big day every five years or so.

I’ve never minded having a birthday near Thanksgiving. In fact, it’s been advantageous to have those days off to celebrate. I’ve always loved the certainty of having my family gathered around me on or near my birthday.

My birthday is just far enough away from Xmas to avoid the dreaded present combo that my cousin Shannon has certainly faced every year. She also has the advantage of having her birthday fall on a national holiday, but at what cost?

Kevin, of course, gets to have tons of candy and cake on his birthday. And I’m sure he’s had a few raucous costume parties along the way. ;o)

Love to all my Wild family cousins: Cindy, Lee, Kevin, Kelly, Shannon and Daniel! And if there are any CORLEY cousins out there that wish to identify themselves, drop me a note!

Football has been a part of my life as far back as I can remember. Some of my earliest memories are of me in my John “Riggo” Riggins jersey nightgown. Yes, even in this miserable season for D.C. football, I can admit that I’m a born-and-raised ‘Skins fan. (Incidentally, it was several years before I learned that not every team had transvestite fans who wear pig snouts to every game. We’re special — that’s just for us.)

I must admit too that I didn’t quite *get* football at first. Touchdowns were irrelevant to me. The players on the field simply weren’t doing their job if there wasn’t a huge pile of players on top of each other when the whistle blew. That’s when I cheered. The bigger the pile-up, the better. Hence, I was usually rooting for fumbles/recoveries, no matter which team had dropped or recovered the ball.

I was 5 years old when I learned the true meaning of football. We were visiting my grandmother, who lived in a sixth-floor condo in Alexandria, Va. It was a gorgeous day and my cousin Lee (also 5) and I were not content to enjoy it from her balcony, so my uncle Rick agreed to take us to a grassy area on the grounds of the complex for a game of football.

The teams we fielded were small: two-man… no, actually one team had one and a half men (Rick and Lee) and the other team was me and Rick’s Chesapeake Bay Retriever, Jackson.

I don’t remember how the defining play began, but somehow I had the ball (Jackson passed it to me?) and I was careening towards the edge of the patch of grass that had been indicated as an end zone. Lee was only 7 months younger than me, but he was also seven inches shorter for quite awhile. He was firmly clamped around my waist (Jackson was probably sniffing something really interesting).

And so, my cousin dragging along beside me and my uncle hooting at the site of it all, I scored my first touchdown.

Big props to Denise Levenick at The Family Curator for her Genealogy and Family History Bloggers Alamanac, which proposed “Touchdown Tales” as today’s writing prompt. 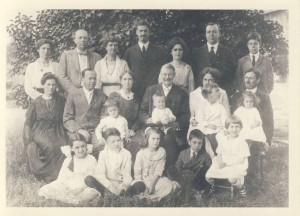 Joseph and Ida Corley surrounded by their children and grand-children, probably around 1918-19. 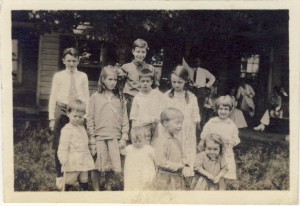 Bonus shot of the cousins