Below are photos of this year’s archaeological dig on The Hill in Easton, part of an effort to prove The Hill is the oldest community in the nation established by free blacks. This year’s dig is taking place on the property of the Women’s Club of Talbot County (18 Talbot Lane). Residents of The Hill are believed to have lived and worked on the property and the archaeology students from the University of Maryland and Morgan State University are looking for evidence of their presence during the dig. The dig will continue through Friday, July 26, and the public is welcome during the hours of 10 a.m. and 3 p.m. each weekday. 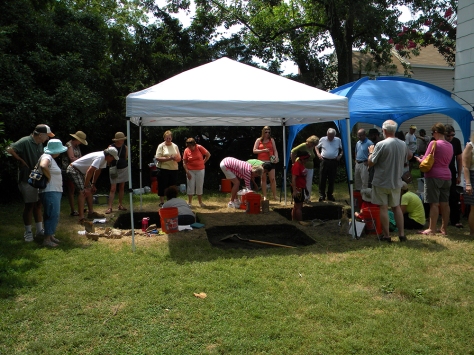 The scene at the dig. Today was a special weekend open house for the public.

One of the students was sifting through the dirt that had been dug out of the test pits.

He found several pieces of pottery. He would lick them to see if they were porcelain. Porcelain pieces won’t stick to your tongue.

He also found a porcelain button.

Other students were working in the test pits. Morgan State student Brittany explains what they’ve found so far in this photo.

This test pit is a tricky one to work in due to the tree roots.

The students are finding a lot of oyster shells in the test pits. They say that oyster shells were given to chickens in the yard. The chickens would eat the shells to aid in their digestion. They have found other evidence of a chicken coop during the dig.

One of the most exciting finds so far this year is this 1794 metal coin.

The back of the coin.

The students had some of their finds on display, including a metal toy gun, marbles, a door hinge and other objects.

Tools of the trade.

The students also had a washing station where they were rinsing finds from another dig in Talbot County. Following are photos of those artifacts: 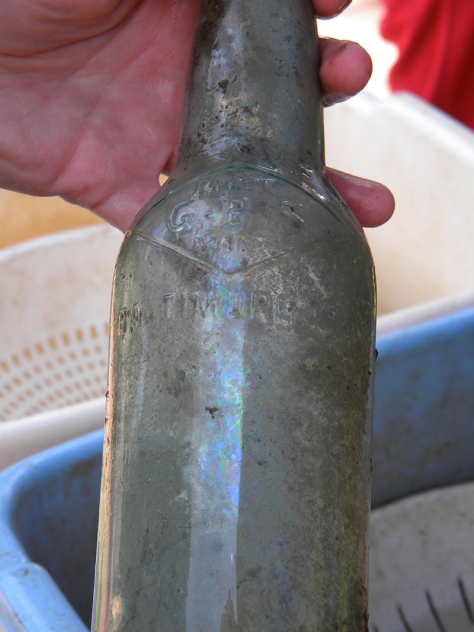 The students found this glass bottle with the word ‘Baltimore’ stamped on it. 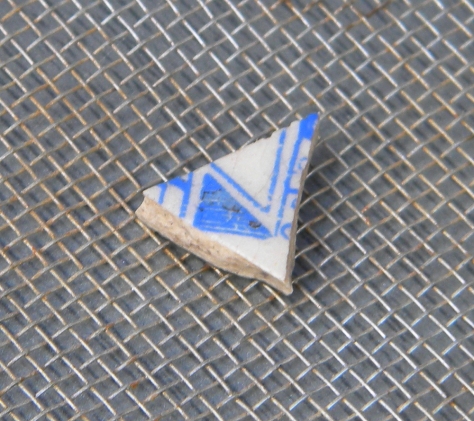 A piece of porcelain.

Hope my local readers can join us today!

More coverage of the archaeological dig happening in Easton at the link above!

I hope everyone in the area can come and be a part of the archaeological dig on The Hill here in Easton. See the link above for more information.

Be sure to check out the latest issue of Shades of the Departed magazine. Not only is the issue chock full of school days memories and vintage photos, but I was given the opportunity to tell the Friends Album story (see page 36). Enjoy!

More exciting details about this historic African American neighborhood in this article!

The Asbury AME church dominates the view down South Lane in The Hill neighborhood in Easton.

There’s beginning to be a lot of buzz about The Hill, perhaps the oldest established African-American neighborhood in the country. Read three recent articles in the Star Democrat at the links below:

More details from ‘The Hill’ come to light

History on ‘The Hill’

More digs planned for ‘The Hill’

What’s more, the neighborhood’s two historic African-American churches, both of which hosted speeches by Frederick Douglass

when he visited Easton, are slated to receive preservation funds in Governor Martin O’Malley’s budget this year.

If you are interested in learning more about The Hill, donating towards the preservation and archaeological work, or getting involved as a volunteer, please visit the Historic Easton web site or send us an email!

For those interested in learning the latest on the explorations and research into The Hill neighborhood in Easton, please plan to join us on Saturday, November 3, from 10 a.m. to 2 p.m.

“Uncovering Our Past” will take place at the Talbot County Senior Center (400 Brookletts Place) and will provide a debriefing on the on-going documentation efforts regarding “The Hill” and a discussion on the role of archeology and historic preservation. Professor Dale Glenwood Green of Morgan State University School of Architecture and Planning and Dr. Mark Leone of the University of Maryland College Park Department of Anthropology will highlight a panel discussion followed by a open session for sharing and collecting stories of the neighborhood history. Light refreshments will be available.

For more information on this project, please see:

The Hill: Amazing Tales and Discoveries

Archaeological Dig on The Hill in Easton

Update from The Hill

Below are photos from a visit I made along with other members of Historic Easton to the Miller’s House in what is now Wye Mills back in April. The Miller’s House was built by Edward Lloyd III in the 1700s to attract a miller to the area as local agriculture transitioned from tobacco-based to grain-based.

After sitting vacant for years, the home has fallen into quite a state of disrepair. Historic Easton is trying to stabilize the house before it falls down. While we have grants to help cover some of the work, we are seeking support from anyone interested to help offset costs (donations can be made via Paypal to historiceaston@gmail.com).

Click on the photos below to view larger versions:

The Miller’s House, perched on a hill above the Wye Mill’s area in Talbot County, Md. A security fence has since been constructed to protect the house.

A closer view of the other side of the house.

There is significant damage to this side of the house, which was compounded by last year’s earthquake.

Close-up view of some of the damage to the exterior wall. 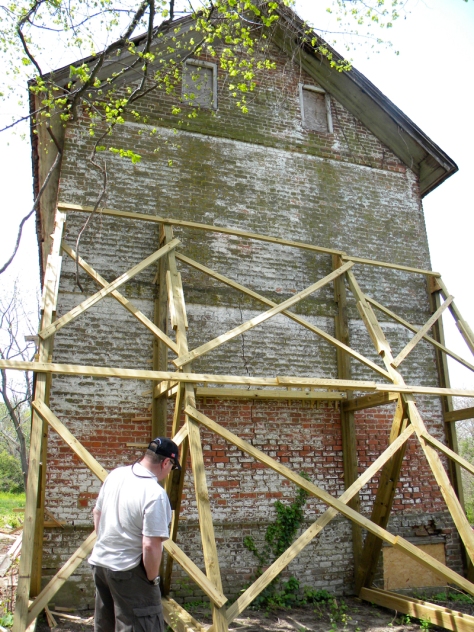 Various means are being employed to keep the walls from moving any further.

Supports also are holding up the floors. This picture was taken in the basement of the house.

This hook is embedded in the ceiling of the basement. A woman whose aunt used to live in the home said that the family lived in the basement during the summer because it was cooler.

Brickwork in the basement.

Closer view of the brickwork. 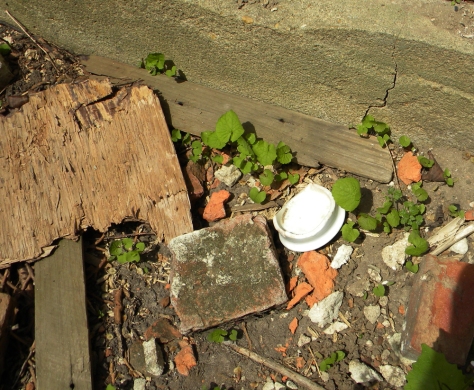 A piece of pottery in the rubble outside of the house.

There is a cemetery on the property — I’ll be helping to map out the gravestones when the weather cools and vegetation dies back. 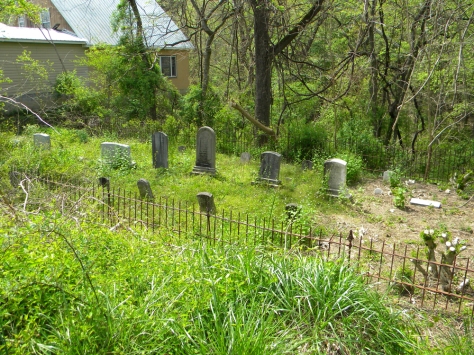 Cemetery on the property.

A piece of pottery in the cemetery.

Pottery fragment on the ground outside of the home.

Snake sunning itself on the brick exterior of the home.

Debris on steps outside of the house shows the color that one of the porches used to be.

Just a quick post to share a link to another blog: Archaeology in Annapolis by the team of students from the University of Maryland who spent three weeks on an archaeological dig at the “Buffalo Soldier’s House” in Easton’s The Hill neighborhood. They found some great stuff!