Ancestry.com sent me an email with new hints for ancestors among the Texas death certificates. Amid this information, I learned the supposed birthplace of my 2G-grandfather, Anson G. Bennett — Warsaw, Mo. I say “supposed,” because Anson obviously wasn’t there to verify the information. I haven’t done a lot of research on my Bennett line — this gives me a new lead to work from.

I spent Thanksgiving at my Aunt Dorrie’s house. My bed was next to a bookcase filled with many family photos. There I saw a photo I barely recognized from when it sat in my grandma’s apartment. I never realized who it was when I was little, but my aunt confirmed that it was my great-grandfather, Herman Wild. Fortunately, I had brought my Flip-Pal scanner with me and scanned the above along with several other photos.

Herman, about whom I have blogged before, was the son of Fridolin Wild (of Germany) and Lena Hoyer. The family lived in San Antonio, Texas. He married Susan Campbell Bennett and their son Herman Bennett Wild was my grandfather.

Another genealogical discovery (for me) over the holiday was that I got to see a stein my aunt has that is engraved with Herman’s sister’s name, Josefa Wild. My aunt didn’t even realize that it was a family heirloom until several years after she received it from my grandmother.

In going through the treasure-trove of items saved by my grandmother, my aunt came upon three wooden rulers. One was made of samples of each kind of wood traditionally used in furniture. The other two were shaped like long pyramids, with a different measuring system on each side.

My aunt said that I should take one of the rulers. I noticed that one had my grandfather’s name written on it and I said she should keep that one. The other had a completely unrelated individual’s name on it! How strange.

My grandfather graduated high school in 1930 in San Antonio, Texas. Apparently he was classmates with someone named Fred A. Slimp and came into possession of his ruler. I can only assume he borrowed it at some point. Or perhaps he picked it up by accident in class one day.

I began trying to find Fred A. Slimp. And find him I did — and three children. Fred died in 1996, but I believe that at least one of his sons is still alive and that I have a current address for him. I hope he gets a kick out of receiving the ruler when I send it to him.

This weekend, one of my aunts and I went through a ton of photos and documents that used to belong to my grandmother. Among the treasures was a funeral announcement for my second great-grandfather, Anson G. Bennett. I wrote about him briefly before.

One of the most exciting things about the article was the photo shown here — I’d never seen his photo before. Unfortunately, the newspaper clipping isn’t dated or identified by publication name. It most likely came from one of the San Antonio papers.

The article reveals several new-to-me facts. One of Anson’s sons was San Antonio city clerk. Anson was buried at St. Mary’s parish cemetery. Anson’s address at the time of his death was 619 Cedar Street.

The following excerpt is especially rich in detail:

“A native of Missouri, he was brought to San Antonio in a covered wagon by his father, Capt. Sam C. Bennett, Civil War veteran and boat captain on the Mississippi river between St. Louis and New Orleans.” (“A. G. Bennett Funeral Services Set,” date and publication unknown.)

I already knew that Anson died on 12 Mar 1944. I didn’t know about his father’s Civil War service. I believe he served the Confederacy as I have evidence he was a slave owner (an obituary for one of the family’s slaves was even published in the San Antonio Express).

Beyond the above clues, searching anew for information on Anson led me to his listing in the 1940 census. I also found another newspaper article that said Samuel C. Bennett was custodian of the Alamo for three years prior to his death in 1900 (“Capt. Bennett Dead,” Dallas Morning News, 16 Jan 1900, digital image, GenealogyBank, http://genealogybank.com : accessed 2 Sep 2012.). I have a feeling there’s going to be a lot more material to find on him.

One of my third great-grandmothers was Sophie Heimel who, according to her gravestone, was from Bavaria. I believe that she came to the U.S. in 1845 at the age of about 17.

I haven’t jumped the pond to investigate her forebears, so please let me know if you share this surname.

Sophie married Julius Hoyer, also from Germany, and they settled in San Antonio, Texas. Her FindaGrave memorial apparently includes text from her obituary. She died in 1883.

Today is the anniversary of the death of my 2nd great-grandmother, Lina Hoyer, who passed away in 1915. She was the daughter of Julius Hoyer and Sophia Heimel, both German immigrants who raised her in San Antonio, Texas. She married Fridolin Wild and together they raised seven children, including my great-grandfather Herman Wild Sr.

In prepping for this blog post, I was reminded that photos of her gravesite have been added to FindaGrave. The memorial there also includes text from her obituary in the San Antonio Light, which includes her last street address, 206 Lavaca Street. Here is a Google Street View image of that address (apparently taken on trash day): 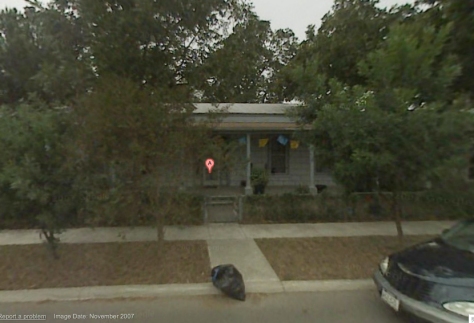 On this date in 1922, my second great-grandmother Josephine Susan (Campbell) Bennett passed away. She was born in 1859 in San Antonio, Texas, and was the granddaughter of the first mayor of San Antonio, William John Smith. Her father was not only a Campbell, but William Wallace Campbell, so I can only assume she had a wee bit of Scottish ancestry.

Josephine married Anson G. Bennett, who hailed from Missouri. Together, they had eight children, including my great grandfather Susan Campbell Bennett.

I haven’t found many more records besides census records of her life, but her daughter, also Josephine, was quite the social butterfly and was written up quite a bit in local papers.